What happens to sources that were attached after a merge if that merge is undone? 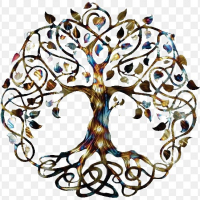 I noticed recently that another user has merged a PID that I’ve worked on which was quite a substantial profile with a PID they created that same day (ie shell profile with little information included). With a bit more investigation I’ve found they’ve done this for at least one other associated PID (the husband). Whilst, theoretically, the match is correct for both merges, because they’ve kept the 2021 PIDs they have effectively archived change logs that date back to 2012 that were attached to the more substantial PIDs.

I personally find the change logs enormously useful to further research and accuracy checking of PIDs, so I’m of a mind to undo the merge and immediately re merge, but this time retaining the older and more complete PID. However, the same user has since attached a number of correctly associated sources to the surviving PID and I realised I’m unsure what will happen to those if I proceed with restoring the deleted (or archived due to merge if we’re being semantic about it) PID.

I’ve had to untangle multiple messy incorrect merges in the past, but haven’t come across this particular issue, so am hoping the community might have some light to shed.

(PS. On another note, I have been trying to post this for over a week via my iPad with no success and have had no success on my laptop eu. I kept getting the message that it would be posted after approval but then it would immediately revert to my drafts??)