Divorce indicator on Person's relationship list (under spouses and Children)

Currently there is no top level visual divorce indication. A divorce event is hidden deep in the relationship edit panel. In my view by NOT having a visual indicator the tree creates a false impression on relationship status.

In a genealogy tree we understand the focus is on the "breeding" contributions of a pair (regardless of them being spouses or not), and whether divorced or not two people participated in the tree of life and produced heirs in a Mendelian sense, but in that case the FamilyTree should stop using the term Spouse altogether on the interface and adopt a more generic term like biological "partner" or "mate" (if that's the practical usage intent of the site)

We could argue that, religiously, the term spouse should not have an expiration date and divorce is an illegitimate concept, but then the site is trying to impose a theological narrative despite the current legal realities.

The suggestion is to include a visual indicator at least in detail view. 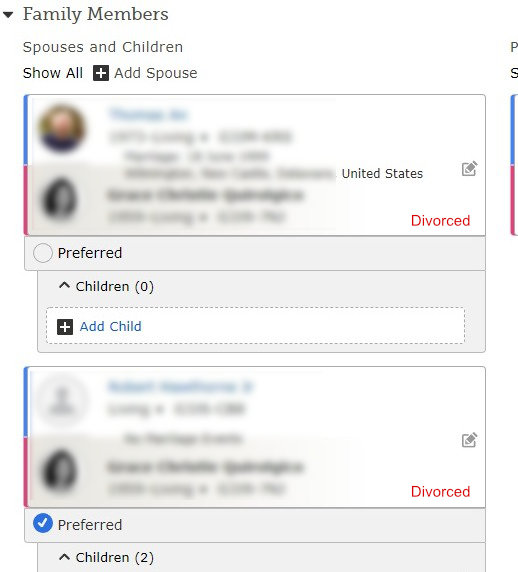