SaraEWarren ✭
May 5 edited May 5 in Temple

Family History Headquarters suggested I ask this community about how to handle my situation, as it will allow me to attach the image of the name card I am referencing.

My Great Grandmother, Harriet Briggs Harlow (K2XJ-8DY), lived to be 108 years old. Back in the 1980's you could do Temple work without a death date once 100 years had passed since the ancestor's birth. As a side note, whoever did her work did not even wait 100 years, as her work was done in 1988 and her birth year was 1889. In 1988, Harriet (known as Bobo) was not even living in an Assistant Living Home yet. Bobo had one daughter who lived into adulthood, two grandchildren (my father and Aunt), and three Great-grandchildren. In 1988, none of her family lines were Temple-attending members. Not sure if that's relevant, but I thought it might clarify that no permission was given to do her work.

Once Bobo passed and I became Temple-worthy, I wanted to do her Temple Work. When I found her records, I learned that all of her Temple Ordinances had been done in 1988-89. The Family History Center in Los Angeles, California told me I should simply re-do all of her work, which I did in 2005. I recall it being properly recorded at one point. Now, her Temple Ordinance records are back showing all of the original ordinance dates that were done when she was living, except for her Initiatory which for some reason is the date I did it once she was deceased.

I realize Bobo's ordinances have been done and are recorded in heaven, but I would very much like her records to reflect the dates that were done AFTER her passing. Part of her history and legacy is that she lived to be 108 years old. By having these incorrect dates, I feel we take a part of her tenacity to live away from her.

Is there a way for me to have these dates corrected?

On another note, Bobo was married to a Trefon Constantine, who may not show up on anyone else's screens. He died in 1976 but was born in Turkey. I'm told his birth location is what keeps him a confidential person to other viewers.

Lastly, I have attached her name card noting the dates and locations of her Temple Work completed by me after her death.

I apologize for the lengthiness of this entry. Thank you in advance for any help you can offer. 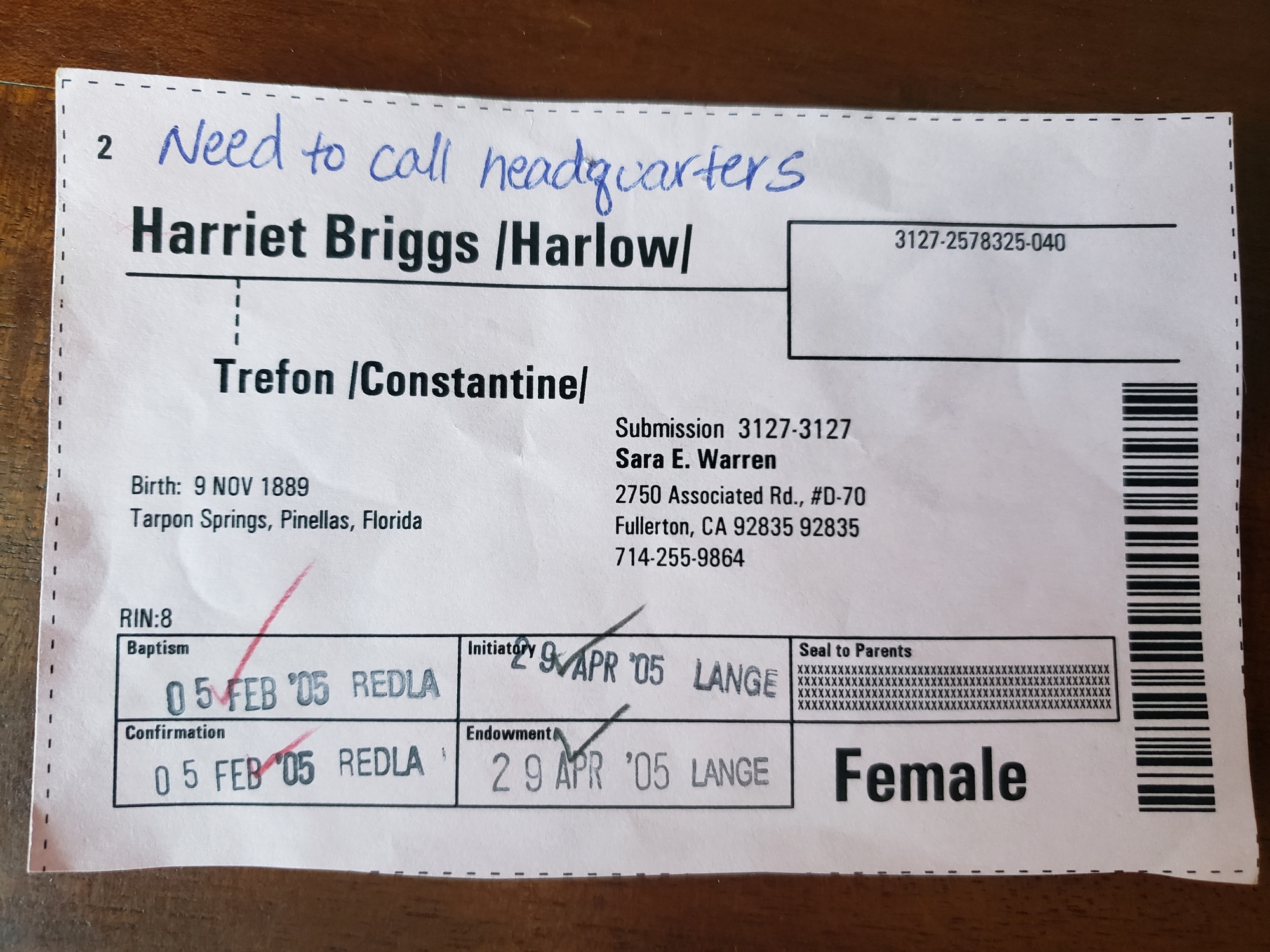